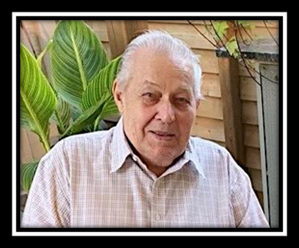 Grant McNair in his 83rd year, of the Bobier Villa long-term care home, formerly of London, Ontario, passed away peacefully on Feb. 02, 2022. Grant is remembered as an easy going, caring family man with a giving heart. In his twilight years, Grant enjoyed hosting holidays for his ever-growing and thriving family, relaxing to classic Westerns, and celebrating the successes of his children, grandchildren, and great-grandchildren. Throughout his life, Grant was a passionate member of the Carling Heights Optimist Club. He joined the Optimists in 1978 during its first year chartered; his service included many leadership roles, such as President, Vice President, and Lieutenant Governor for the Midwestern Ontario district. His Optimist career ranged from working bicycle rodeos, casinos, and the Santa Claus Parade to volunteer bartending at the Delaware Speedway, Grand Bend Motorplex, and London Air Show; Grant loved running beer gardens to hydrate and entertain patrons with a festive and giving atmosphere. Grant helped raise $30,000 for a National Service Dog for an autistic child and raised funds to mail packages of community donations to the children of an Indigenous community in Northern Ontario. His friends at the Optimists remember Grant as a man who was always ready to help the club, help the kids, and make London a better place. Grant’s commitment to youth, his community, and his family was unparalleled. When Grant wasn’t volunteering to support his community he was often working, first as an auto mechanic for Bell Canada and then as owner of Lloyd’s Cycle. He would always be ready with a warm smile and a drink for whoever showed up at his door. Grant was preceded in death by his loving wife Mary “Jean” Wigley and his siblings Bernice Mann (Wilf), Alex Voisin, Ross McNair (Grace), Scott McNair (Alice), John McNair, David McNair. Grant is survived by: his siblings, Marie Voisin and Shirley Wise (Cyril); his five children, Jody McNair Jones (Stef), Terri McNair (Joe Vella), Cindy Queenan (Pat), Kelly McNair (Bob Head), and Grant McNair (Debbie); and 10 grandchildren, Zoey Jones, Tia Jones, Frankie Harper (Ben), Alyssa Holden, Blake Holden, Sam Holden, Justin MacEachern (Amanda Clarke), Stacey Nicholls, Rebecca McNair and Alistair McNair: and 5 great grandchildren, Damian MacEachern, Mason MacEachern, Triton MacEachern, Ariana Nicholls, Tyson Nicholls and many nieces and nephews. At Grant’s request cremation has taken place. A private memorial will be held at a later date. Memorial contributions may be made to any charity that works to support their community/ies like Grant did. Notifications of such donations in his honour, or thoughts, photos, and well-wishes for the family are welcome, and may be sent to McNairMemorial@gmail.com Special thanks to the team at Bobier Villa for their consistently compassionate and respectful care of Grant in his final days.

Share Your Memory of
Grant
Upload Your Memory View All Memories
Be the first to upload a memory!
Share A Memory