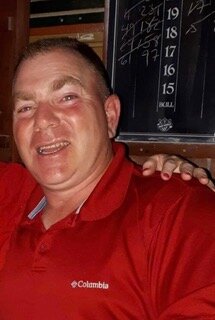 It is with tremendous grief that the family of Garnet Prydie, born August 21, 1965, announce his passing on July 22nd, 2022. Age 56. Garnet was taken much too soon as a result of a pedestrian hit and run collision. He is survived by his roommate and best friend George McClure as well as many friends and co-workers at Sunningdale Golf and Country Club. Son of Mariette Prydie of London, Ontario. Brother to Suzan Rodgers, Louise (Gord) Thompson and Christine (Wayne) Selinger. Uncle to Crystal (Mike) Rodgers, Melissa Rodgers, Alastair (Sarah) Thompson, Mackenzie Thompson, Isabella Thompson, Graeme Selinger, Grace Selinger and Owen Selinger. Great Uncle to Noah Rodgers, Coleson Rodgers and Lincoln Rodgers. Predeceased by his father, Richard Prydie (2009) of North Bay. Garnet was an air force brat born in Zweibrücken, Germany, who lived in many places but spent his formative years in North Bay. He attended Laurentian University and obtained a Bachelor of Commerce Degree (1990). Studied at the University of Guelph Turfgrass Institute (2003). Garnet began work at Sunningdale in July 1995 and became a key member of the groundskeeping staff as the 2nd Assistant Golf Course Superintendent. On and off the course, he was known for his commitment, hard work, and his ability to get the job done. Garnet had a very gentle demeanour but an amazing smile for everyone he met. He was known for his quick wit and wicked sense of humour. Time spent with family and friends meant everything to Garnet, who never missed a birthday or holiday celebration. There will be a celebration of life held for Garnet on August 4th between 5:00-7:00 p.m. at Sunningdale Golf & Country Club. Expressions of sympathy can be made online at www.londoncremation.com. Donations to the Heart and Stroke Foundation www.heartandstroke.ca 519-679-0641 or London Regional Cancer Program www.lhsc.on.ca/london-regional-cancer-program/about-london-regional-cancer-program or would be appreciated. Special thanks to the first responders who were present at the scene.

Share Your Memory of
Garnet
Upload Your Memory View All Memories
Be the first to upload a memory!
Share A Memory